22 yrs after it was discontinued, plans are afoot to relaunch the service in 3 mths.

Twenty-two years after its last voyage the Mumbai-Goa steamer service will set sail once again, with Goa Chief Minister Manohar Parrikar and his Maharashtra counterpart Prthviraj Chauhan keen on relaunching the service.

A proposal to restart the service was made by the Goa Government in the last week of May, and was promptly seconded by the Maharashtra Government. “It has been cleared and the service will be launched in the next three months,” Captain of Ports, Goa, James Braganza told Mirror.

In a presentation on the service to the state government, Braganza said, “The service will be purely an alternative mode of transport between Mumbai and Goa, minus any frills, but comfortable.”

As earlier, the service is expected to operate between Ferry Wharf (Bhaucha Dhakka) in Mazagaon and Panaji port. En route it will halt at Raigad, Malvan, Ratnagiri and Vengurla, where smaller boats will ferry passengers to the shore.

According to Braganza, there is much scope for a daily steamer service on the route, as trains invariably run full and buses are not preferred by many.

In the past, a few operators like Damania did launch catamaran services, but they never really took off. “It has never been a pleasant experience for passengers due to the heavy rolling and pitching effects of the sea,” Braganza explained.

“A private catamaran service run by Blue Ocean Cruises currently does operate on the route. But it is targeted at tourists and charges Rs 13,000 per head,” Braganza said. “The steamer service will cater to regular commuters and tickets will be on par with the railways.”

The Goa Government has invited an expression of interest from reputed shipping companies and operators to re-commence the service, and a technical committee has been formed to decide on the type of ship and other technicalities, an official at the state secretariat said.

On board
Photo credit: lars erlandsson

After the service’s last voyage in 1991, Konkan Shakti and Konkan Sevak, the two vessels operated on the route, were sent to ferry the armed forces to Sri Lanka at the behest of the late prime minister Rajiv Gandhi.

Note: The above article first appeared on http://www.mumbaimirror.com and same was reproduced with additional info and photographs from various sources. We tried our best to give due credits to all our sources.

Second sighting of the St. Inez Croc! This what Photographer Savio Fonseca writes “Indian Mugger Crocodile (Crocodylus palustris) Clicked at 1822 hours on 16th June 2013 Location : same spot as earlier sighting at Dukle Heaven, St Inez 1-Unable to confirm if it is the same crocodile seen earlier. But still appears to be a juvenile due to traces of brown / tan and size. 2-Plastic Bag seen in the earlier croc not visible here 3-Seen in the presence of Avdhut Lawande, Gaurish Wagle, Waman Bhatkuly and Kashinath Bhat 4-Eye to Snout length estimated in consultation with those present at 10 inches. Consequently the length is from nose tip to the back of the occipital platform will be approximately 13 inches. Using the universal accepted formula of 1:7, the length of the croc can be calculated to approximately 91 inches or 7.5 feet long! 5-Croc was not found to be shy and stayed still even in presence of a fair number of curious onlookers which included children of all age groups 6-Check the four photos attached here showing all angles including a perspective with reference to the surroundings“ 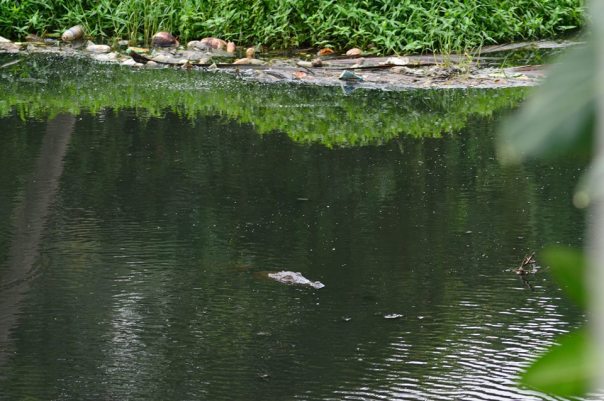 A Crocodile was spotted at the Panjim – St. Inez creek.

A Crocodile was spotted at the Panjim – St. Inez creek. Cool isn’t it? But wait a sec can you see a black garbage bag around it’s neck. Well that’s not cool, isn’t it?

Savio Fonseca who capture the Crocodile on camera writes:
“(1) This is a 4-5′ juvenile Indian Mugger Crocodile (Crocodylus palustris) from it brown color with black bands. adults which can grow to 20 feet are fully dark gray or black. Apparently looks like a 3-4 year old
(2) there is a black garbage bag around its neck. Possibly it has found the bag with organic stuff, tore through it to eat its contents and the bag is now encircling its neck
(3) I have been looking for it ever since but there is no sign of it. Trying using a flashlight at night to spot the tell-tale “fiery eyes” but no luck. Workers spotted it briefly on 13th, Wednesday before it slid back into the murky depths of the creek.
(4) just hope the authorities have sense to get it rescued / rehabilitated asap so that no harm comes to humans and itself since this is an apex ambush predator on top of the food chain and does not discriminate about what it wants to eat .. (photographed at 7:28 AM at upper reaches of St Inez Creek at Dukle Heaven on Monday 11th June 2013)”